The term perspective used in the graphic arts is an approximation of distance/depth/space on a flat surface (2D) of an image as it is seen by the eye (3D). The two most characteristic features of perspective are that objects are drawn smaller as their distance from the observer increases and foreshortened (the size of an object’s dimensions along the line of sight are relatively shorter than dimensions across the line of sight). All of the angles within the image will converge together as an imaginary point in the distance replicating the effect of the vanishing point of a horizon line.

Another way to think about linear perspective is to imagine looking out a window. Within the painting, linear perspective mimics light passing from the scene through the “window” (the painting), to the viewer’s eye. Except the image is created on the flat surface of the canvas or paper, and there is no receding background, just the illusion of depth. The adjustment of size between objects and the trick of angling edges of objects toward the “horizon” creates an illusion, ergo perspective, of depth and distance.

Before the practice of perspective, early paintings and drawings sized objects and characters hierarchically according to their spiritual or thematic importance, not their distance from the viewer, and they did not use foreshortening. This is called “vertical perspective” in which the most important figures are shown as the highest and largest in the composition. They are devoid of space and indicate relative positioning of compositional elements with overlapping and flattened figures. This common in paintings from the Parthenon Marbles and in palace paintings of Ancient Egypt’s royal families. Members of the royal family and gods would be the largest among the figures and distance can only be suggested by placing the “nearer” figures below the larger figures. Byzantine paintings also follow the design of vertical perspective.

While linear perspective was known to the early Romans and Greeks, the means of employing this art device were lost to the Italians. It was only in the early 15th century, right at the start of the Italian Renaissance, that linear perspective became the standard. The architect Filippo Brunelleschi is credited with the “discovery” of the mathematical laws of linear perspective. Brunelleschi observed that when you have a fixed, single point of view, parallel lines seem to converge at together at an imaginary point in the distance. He then applied this idea of a single vanishing point to a canvas, and discovered a method for calculating -and drawing – depth. He was able to demonstrate its basic principles, including the concept of the vanishing point, with two panels and a mirror. The first panel was a painting depicting the Florentine Baptistery as viewed frontally from the western portal of the Palazzo Vecchio cathedral (at the time it was unfinished), and second shows the Palazzo Vecchio as seen obliquely from its northwest corner. 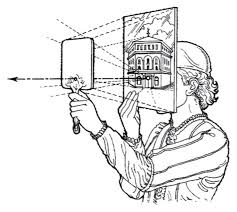 Brunelleschi drilled a hole drilled through the centric vanishing point of the Baptistery panel allowing the viewer to peer through from behind. Brunelleschi intended that the viewer stand in front of the real Baptistry with a mirror in between the scene and the panel. As the mirror was moved into and out of view, the observer saw the striking similarity between the actual view of the Baptistery, and the reflected view of the painted Baptistery image. Moving the mirror proved perspective through virtual overlay; through the lack of change between the image and reality. On his panel, Brunelleschi used silver leaf in the sky to portray its luminosity and drifting clouds. Brunelleschi wanted his new perspective “realism” to be tested not by comparing the painted image to the actual Baptistery but to its reflection in a mirror according to the Euclidean laws of geometric optics. This feat vividly showed artists how they might paint their images, not merely as flat two-dimensional shapes, but more like three-dimensional structures just as mirrors reflect them. Daly, both panels of Brunelleschi’s have since been lost.

Here is a link to a youtube video that demonstrates Brunelleschi’s experiment: