YBA=Young British Artists. Both title and acronym refer to a loose group of visual artists who began to exhibit together in London 1988. The first use of the term “young British artists” was by Michael Corris in ArtForum (May 1992) and the acronym  “YBA” (or “yBa”) was coined by Simon Ford in  1996 in his feature “Myth Making” for the March issue of Art Monthly magazine. Since then it has manifested into a historic term because most of the YBAs were born in the mid-1960s, with an active period from the 1980s to the late 1990s, though many still make art today— just not large group exhibits. Though strictly speaking, it includes only those artists who showed at Freeze, or Sensation. However, the name is also used in a broader sense to embrace all progressive, avant-garde British artists who achieved recognition during the late 1980s and 90s. A new termPost-YBAs has been coined to describe British artists emerging in the 2000s. They include Darren Almond, Mike Nelson, Tim Noble, Oliver Payne, Nick Relph, Eva Rothschild, Simon Starling, David Thorpe, Sue Webster, Carey Young, and others.

Most of the YBAs graduated from Goldsmiths in the BA Fine Art course in the late 1980s; studying under the likes of Michael Craig-Martin and Richard Wentworth who undoubtably had a huge impact on the approach to art making these young artists made after graduating. From the humble start of exhibiting in warehouses their innovative and provocative shows quickly gained popularity, attracting the attention cultural royalty like Charles Saatchi. The post-war authority of things socially acceptable, Saatchi  invested much of his money in supporting and collecting his favorites like Damien Hirst and Rich Wentworth. Saatchi even went beyond funding and collaborated with Hirst and Wentworth in organizing exhibitions. Art from the YBAs also provided the catalysis so desperately needed to rejuvenate the British art scene, and even starting artistic atmospheres where previously there had been none.

The six exhibitions the serve to unify this loose group of art affiliates were held between March 1992 and November 1996 at the Saatchi Gallery, London. The genesis of the YBAs can be traced to a 1988 warehouse show in London,  entitled Frieze and it was curated by none other than Damien Hirst. Hirst exhibited works by himself and 15 of his fellow Goldmiths’ students, including Angela Bulloch, Gary Hume, Sarah Lucas, Richard Patterson and Fiona Rae. Subsequent group exhibitions cemented the artists’ reputations for independence, savvy entrepreneurial skills and the ability to manipulate the media. The warehouse show Modern Medicine (1990) in particular demonstrated the artists skill at transforming different media and was also curated by Hirst, but in this instance he partnered with journalist Carl Freedman (b 1965) Later Freedman curated Minky Manky (1995; London, S. London A.G.). But the consolidation of the artists’ status was cemented in 1995 with a large-scale group exhibition Brilliant! held at the Walker Art Center a respected art museumin Minneapolis, USA.

Works by Young British Artists include all forms of painting, a wide range of sculpture and assemblage, contemporary video and installation art, a variety of photography, and conceptual art.  Thus famous works of Britart have included: maggots and dead animals (Hirst); concrete casts of whole houses (Rachel Whiteread); a bed surrounded by highly personal detritus including condoms (Tracey Emin); found objects crushed by a steamroller (Cornelia Parker); elephant dung (Chris Ofili); and frozen blood (Marc Quinn) and many more varied materials. Numerous YBA works have also employed a number of controversial references some of which are such as Jenny Saville’s paintings of grossly obese nude female forms and the Chapman brothers’ savagely mutilated shop-window dummies. They force us to consider these topics with shock tactics and they were quite successful. Other artists made conceptual video art like Mark Wallinger’s Turner Prize exhibit, a 2-hour film of a person wandering around an art gallery in a bear suit; or Gillian Wearing’s video of actors dressed in police uniforms who stood still for an hour in total silence; or Martin Creed’s installation of a white room with a single light bulb blinking off and on. Despite the varied showcase of subject matter, styles, and medium, there remains a common “anything-goes attitude” to materials and the creative process. Their works also share clear influence from Marcel Duchamp in the prominence given to conceptual art, found objects and unconventional, even humorous interpretations of everyday life. 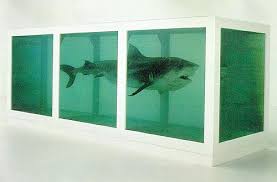 Damien Hirst, “The Physical Impossibility of Death in the Mind of Someone Living” a tiger shark suspended in formaldehyde, 1991

I also think they all model after Joseph Beuys in their experiments with positioning the artist within society, asking what is the artists’s purpose or message? Gavin considers how his art is influenced by time passing showing his work through the lens the future as if we are looking back at his work, and in some cases as though he were already deceased. Hirst’s The Physical Impossibility of Death in the Mind of Someone Living (tiger shark, glass and steel, 1991; London, Saatchi Gal.) also underscores the prospect of imminent death. Sarah Lucas’ Two Fried Eggs and a Kebab (photograph, fried eggs, kebab and table, 1992; London, Saatchi Gal.) asks us to consider issues of sexuality with food items foreign to the gallery environment. The signature pieces of Gavin Turk, like Cave (ceramic, 1991; London, Saatchi Gal.), explore the relationship of the artist to his work and his public. Other aYBAs include Chris Ofili, Marc Quinn, Rachel Whiteread (featured in Freeze the first of Saatchi’s group exhibitions), Dinos and Jake Chapman and Ron Mueck. Even  though the group enjoyed much success, YBAs were heavily criticized for their lack of craftsmanship and other artistic traits, by numerous art critics the composer Simon Rattle, and the playwright Tom Stoppard. But by and large the British public have enthusiastically embraced the YBAs for their contributions to the visual arts establishment. One reason for this, is that there works have rescued in almost every aspect Britain’s  contemporary art, significantly raising museum attendance figures in the process. They also contributed to the success of a whole new generation of contemporary galleries, including Jay Jopling’s White Cube, Victoria Miro, Karsten Schubert, Sadie Coles, Maureen Paley’s Interim Art, and Antony Wilkinson Gallery -as as increasing the circulation of contemporary British art magazines.

Another one of the best aspects of this group, in my opinion is the evident contributions of female artists. Gillian Wearing, Tracey Emin (nominated in 1999 Turner Prize for My Bed). Fiona Rae,  (1963 Untitled, Emergency Room) and Jenny Saville and more have all benefited from the publicity of associating with the group finding much success and a generally equal amount of respect and fame as their male peers as well as receiving respect from their male contemporaries. 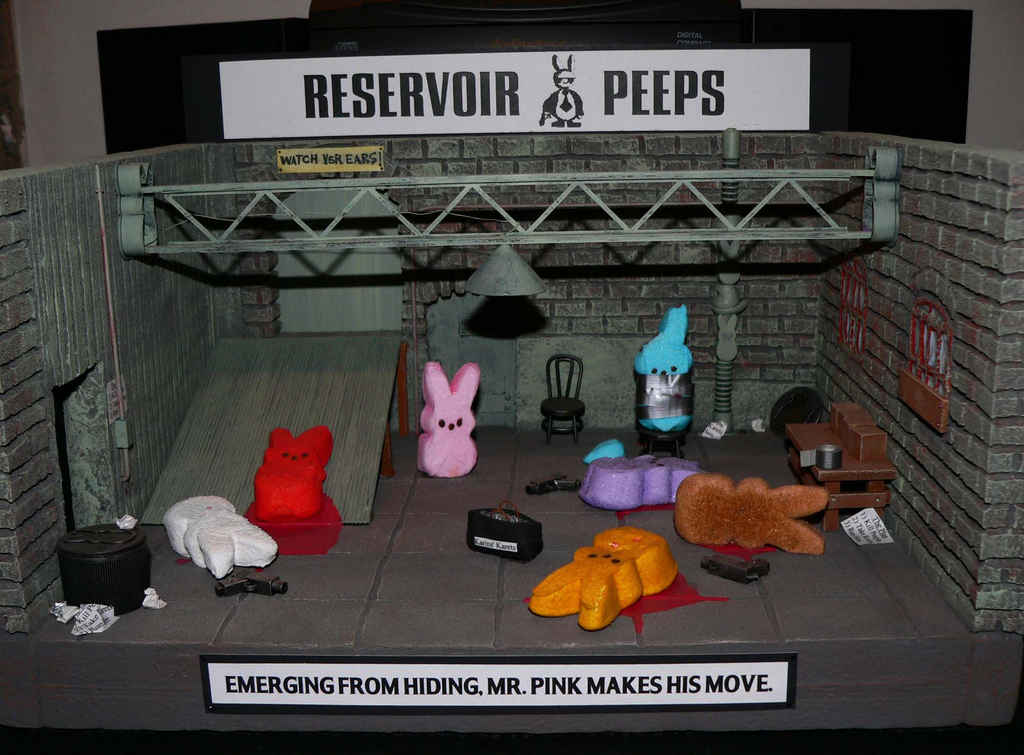 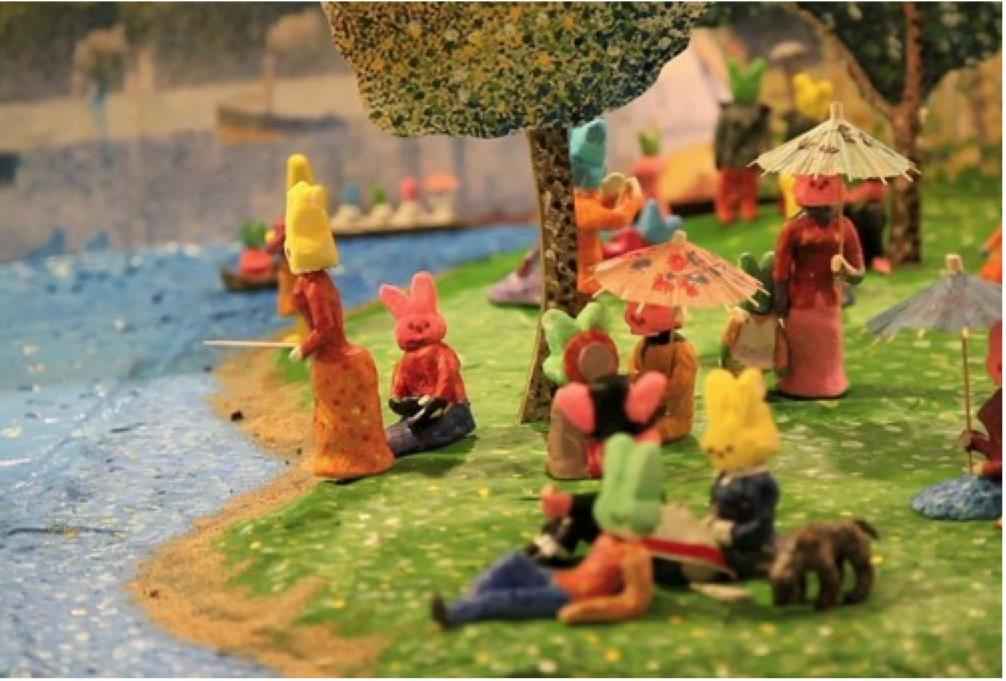 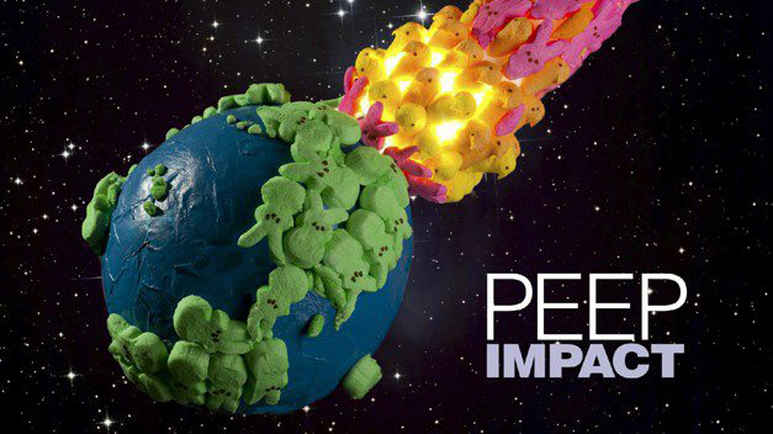 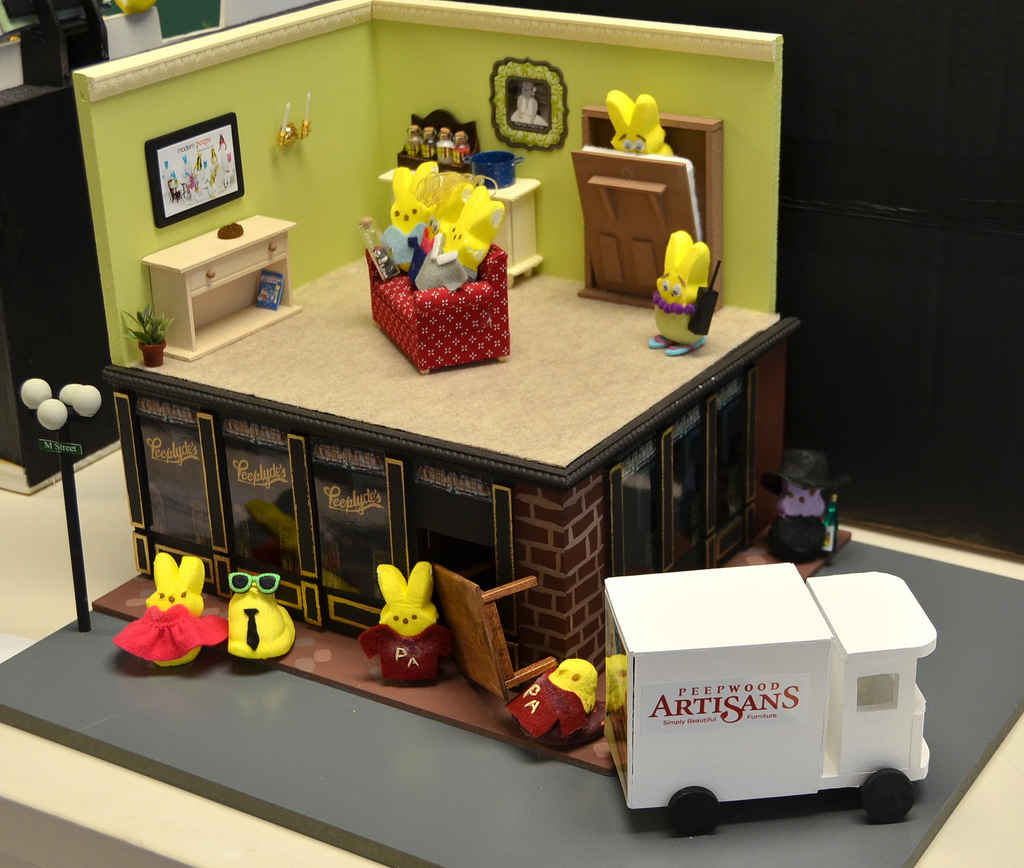 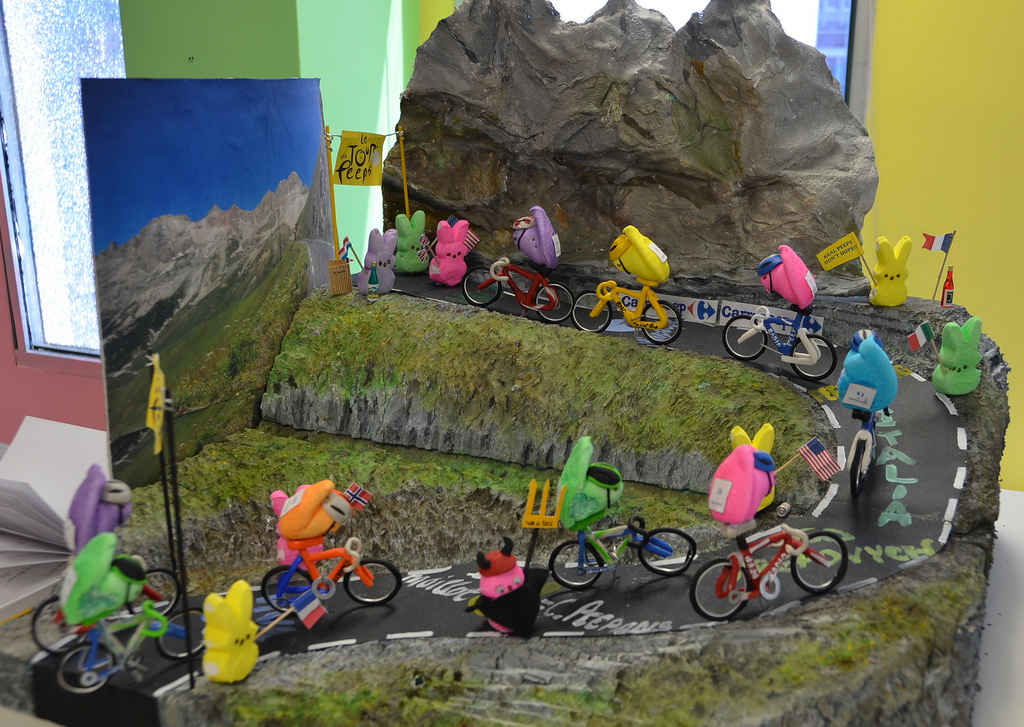 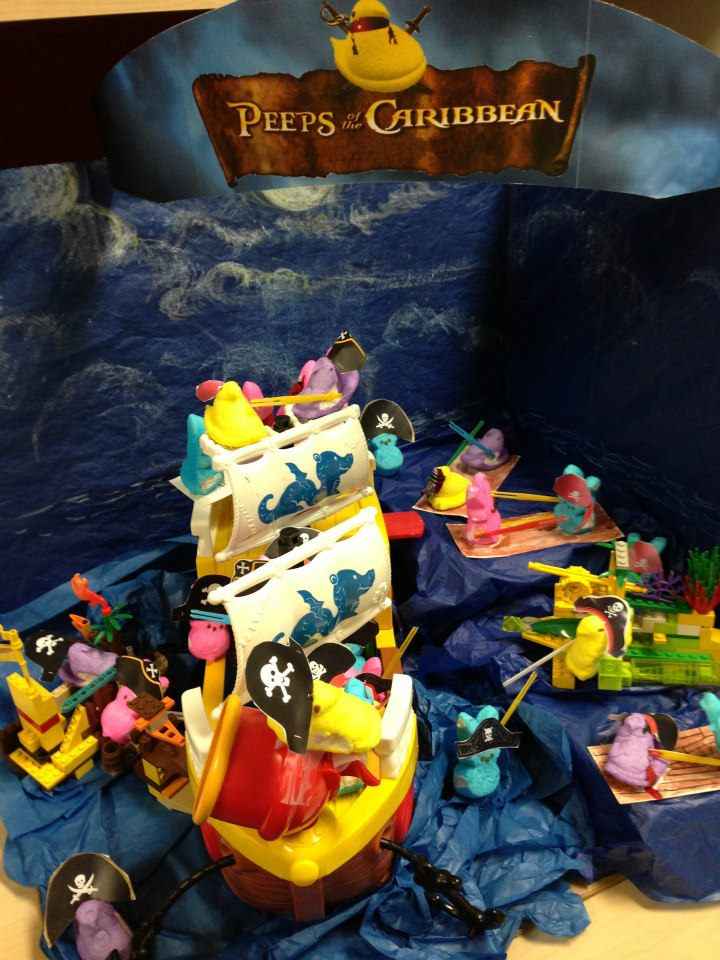 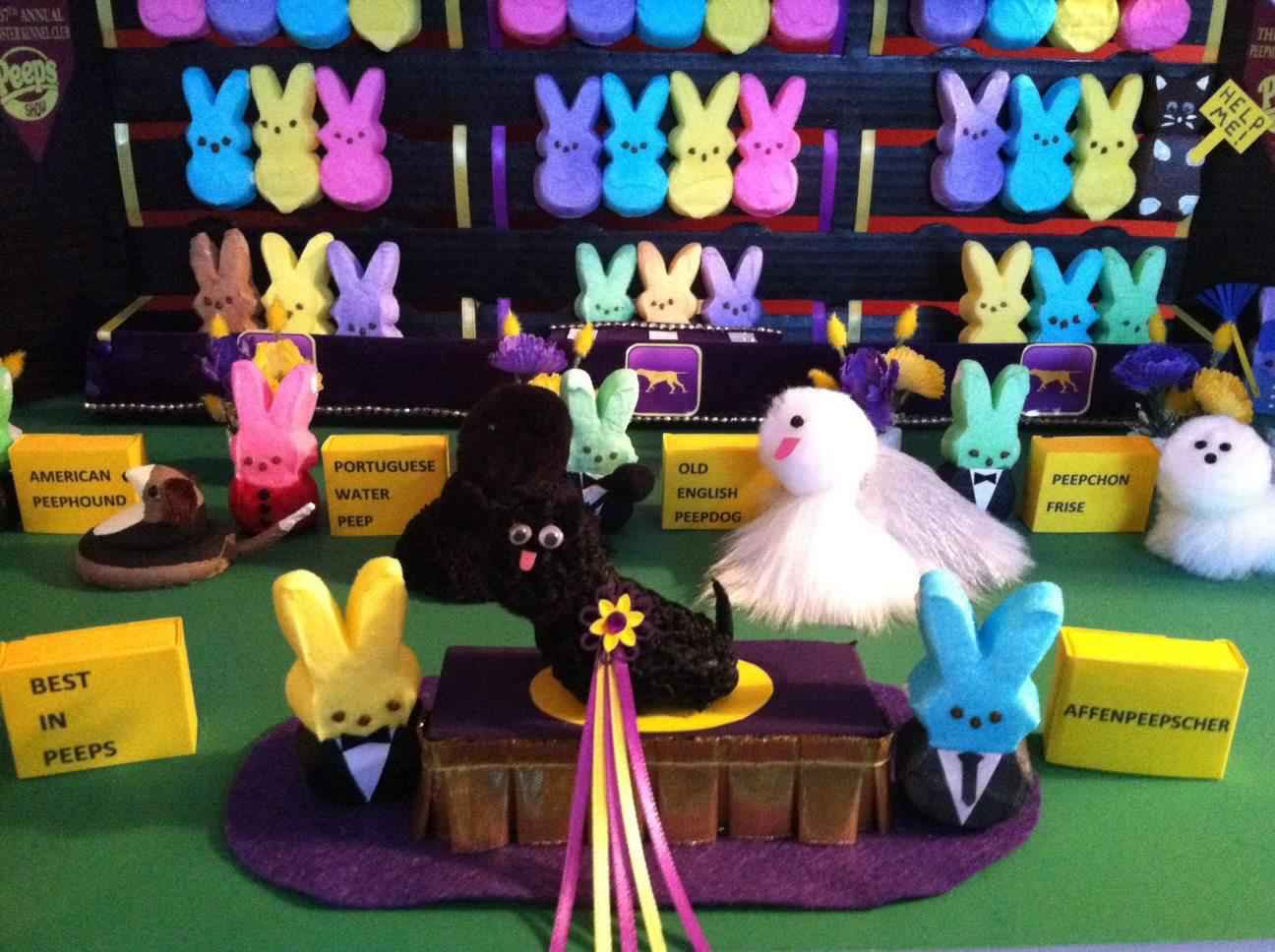 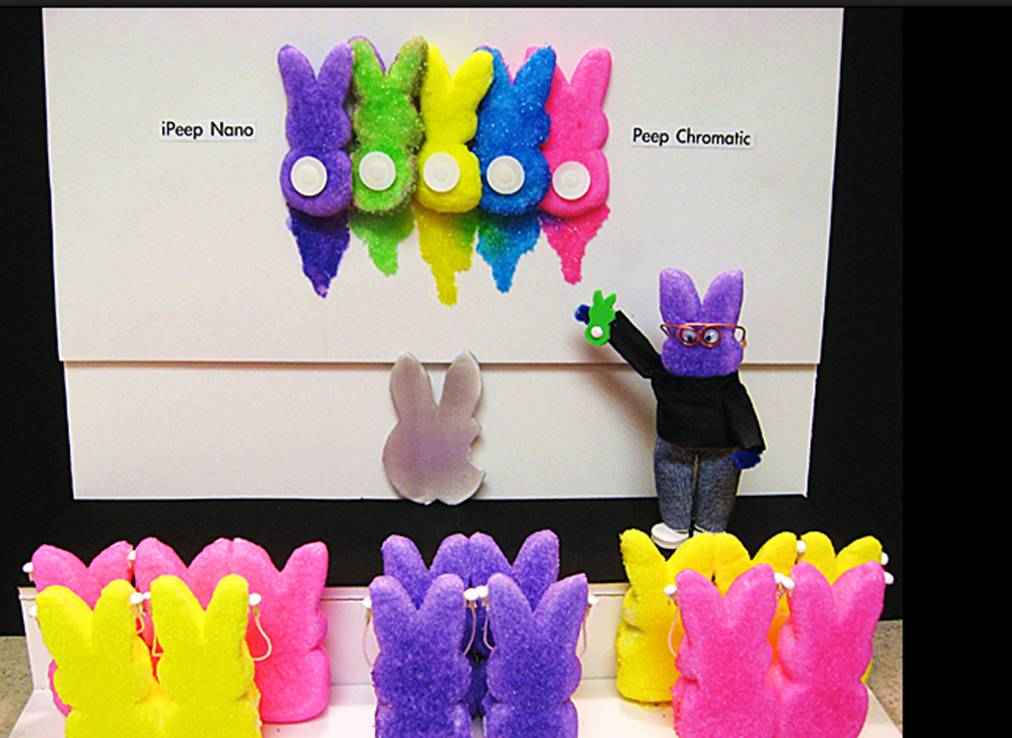 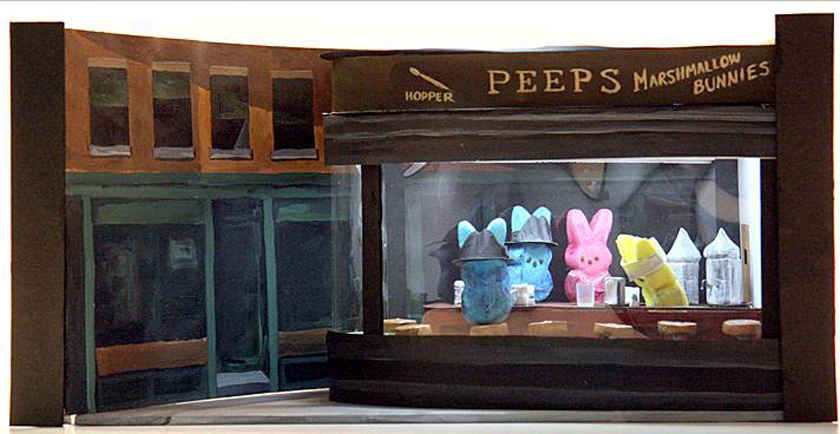 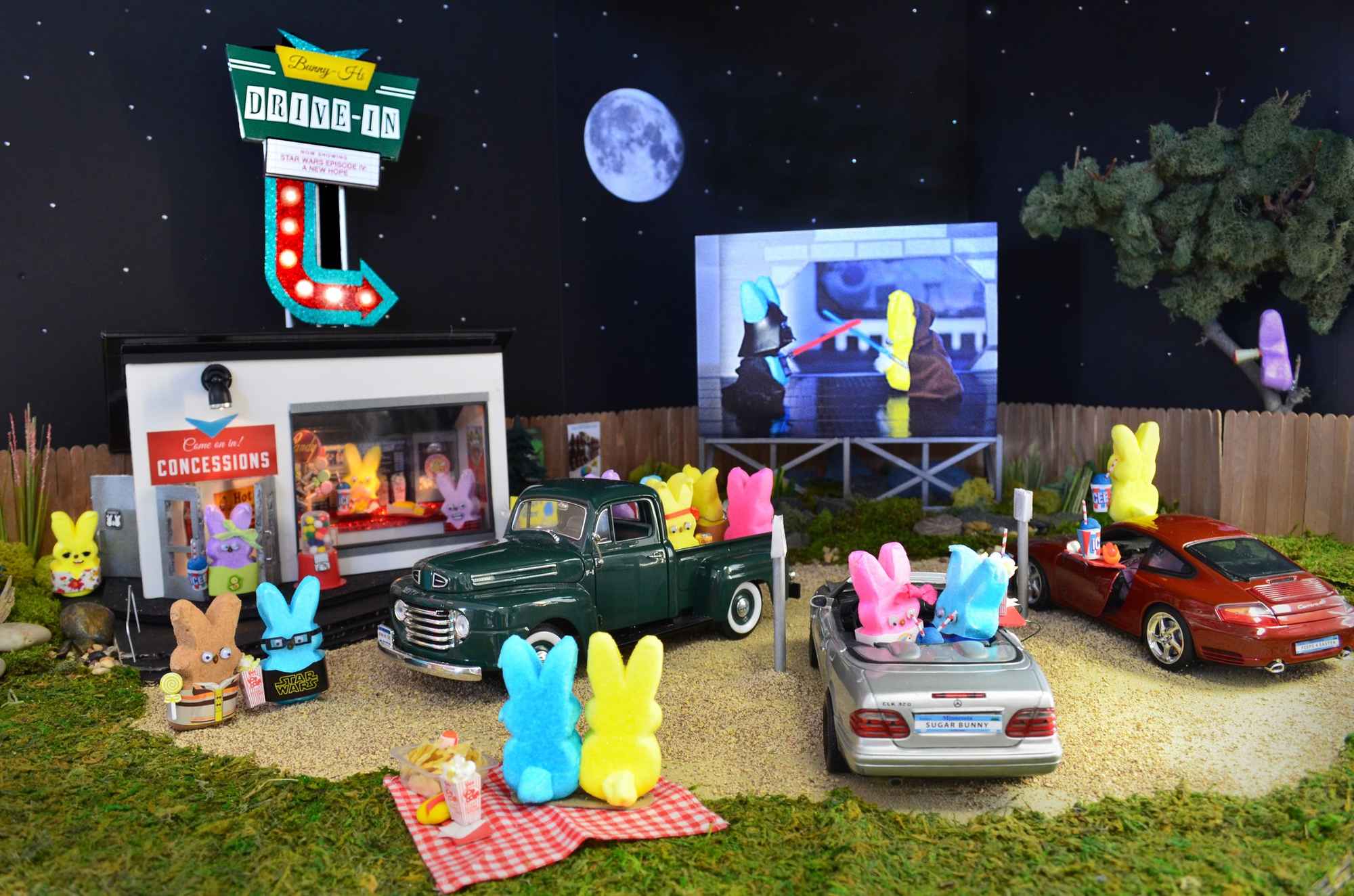 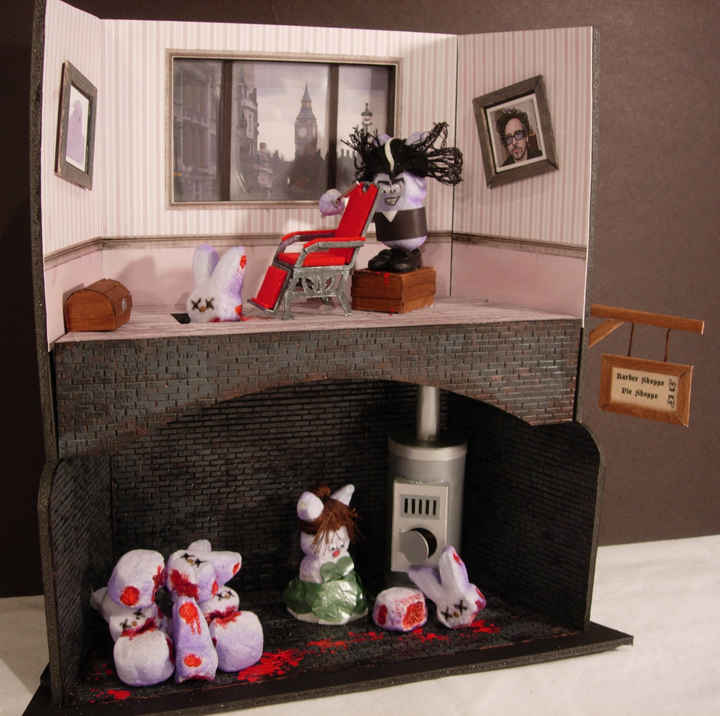 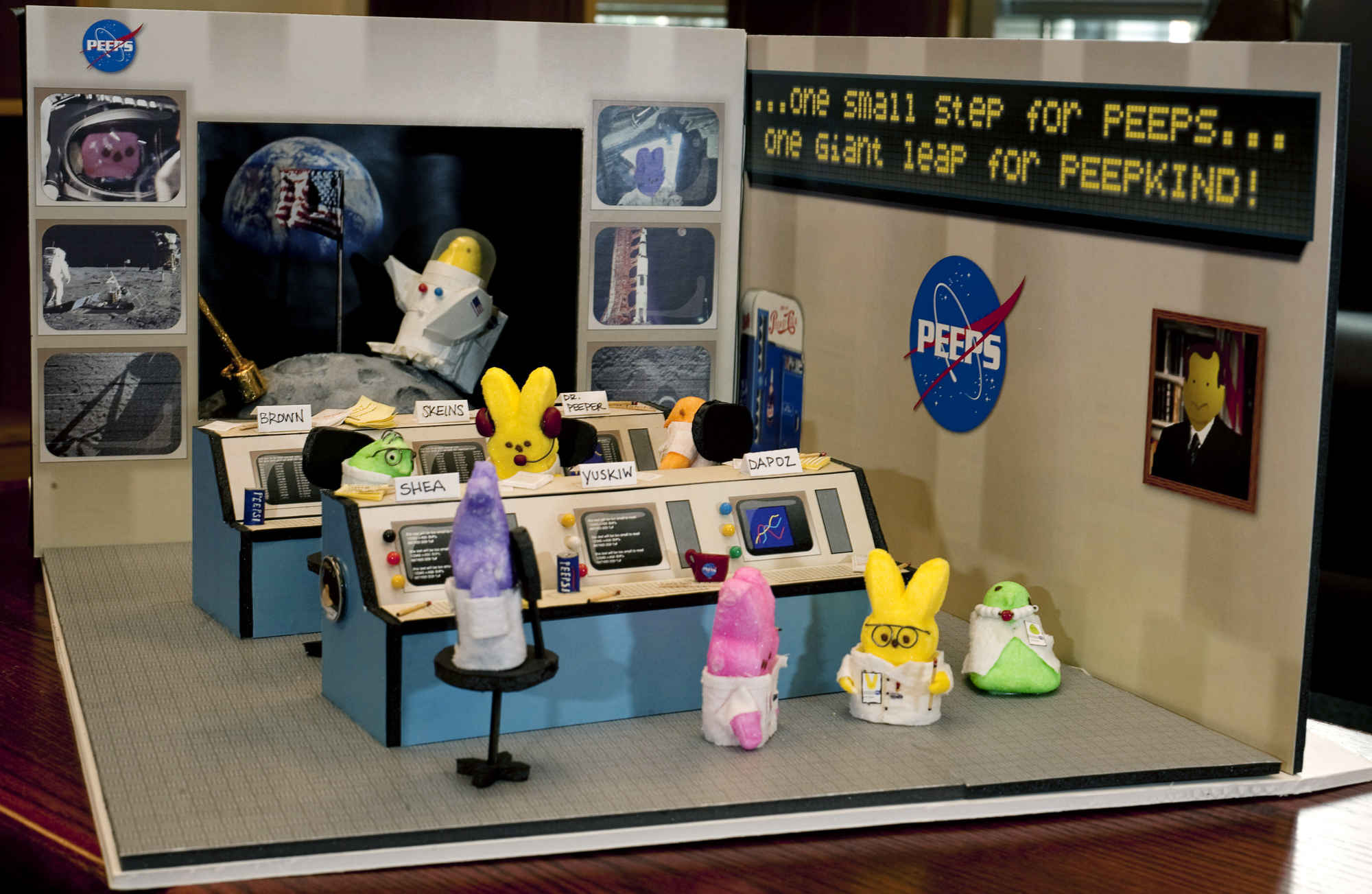 Banksy’s Latest Work Takes On The Meat Industry … With Puppets : The Salt : NPR

Banksy’s Latest Work Takes On The Meat Industry … With Puppets : The Salt : NPR.

Oh how I love that Bansky! This is great little read and short video whether you are animal activist or not!

I thought that this collaboration between photographer Sarah Anne Ward and food stylist Heather Meldrom and Michelle Gatton looked good enough to share. They remade iconic works of modern art from food items, took pictures with a little editing had some cool  results. It’s just silly, but it is a Monday and  I figured we could all use some humor!

Justification For Playing with Your Food

London-based photographer Carl Warner is definitely up to something different. These photographs selected from his work Foodscapes are assemled entirely out of food! That’s right – all of the pictures below are actually created out of fresh food. Warner uses a wide variety of different ingredients, such as deli meats, fresh fish, fruit, vegetables, candy, and bread, to build incredibly detailed worlds right out of reality of dreams. Warner’s food art includes sailing ships on sunny days or battling stormy seas, the Great Wall of China, forests and mountains, all the while demonstrating his amazing eye for even the smallest details.

Warner has been working in advertising and shooting still-lifes for over 25 years, and has been developing Foodscapes for the past 10 years. His expertise for shooting table-top pictures and usage of artificial light has undoubtedly aided in making the food pictures look so realistic. He so meticulous that on first glance you can’t tell that the miniature food models aren’t actually landscape photographs.

The Foodscapes received international recognition back in 2008, and Carl has been coming up with new pieces ever since. Besides food, this artist also uses other medium to imitate landscapes. His sensual Bodyscapes project featured intricately tangled human bodies, which make you tilt your head a little with each picture.  Go here to view his extensive portfolio at his website: http://www.carlwarner.com